A day close to elephants is high on the bucket list of most tourists in Thailand. Understandable, and luckily, more and more tourists go for ethical options, where the gentle giants are treated as the wild animals they are, rather than pets you can play with. But even then, it’s hard to find a suited option – there are just so many offers to spend time with elephants, and some of them look ethical at first sight, but turn out to offer elephant riding after some research. Elephant Nature Park in Chiang Mai is different, and, as far as I could judge from research and my day there, very ethical.

We’ve all seen them – the photos of proud travellers, standing in the water next to an elephant they have just washed and fed. Most of them feel like they have done something ethical responsible, even if elephants do not require any help when bathing. That’s why you won’t be able to take such photos at Elephant Nature Park in Chiang Mai, an ethical responsible elephant sanctuary in the North of Thailand. Instead of getting cute tourist photos, the focus of the visit is on explaining the nature of elephants, and why it’s so important to save them from their ‘jobs’ in tourism.

Luckily that doesn’t mean you can’t get anywhere close to the elephants. Most animals at Elephant Nature Park have worked in tourism before and were bought out of their jobs to continue a peaceful life here in the mountains. But, after years of working with humans, they are used to them and might even be very nosy. While we were told we won’t be able to touch elephants when we bought our tickets the day before the one-day adventure, the elephants didn’t seem to care about these instructions and made sure to check out if we definitely didn’t cary any food for them.

Elephant Nature Park is located about 60 kilometers out of Chiang Mai. The ticket for a one-day visit costs 2500 baht, which is about 70 Euros, including bus transfer from your hotel in Chiang Mai, the tour around the grounds, lots of information and a buffet lunch. A fair price, especially considering that the money is needed to make sure the elephants have enough food every single day. 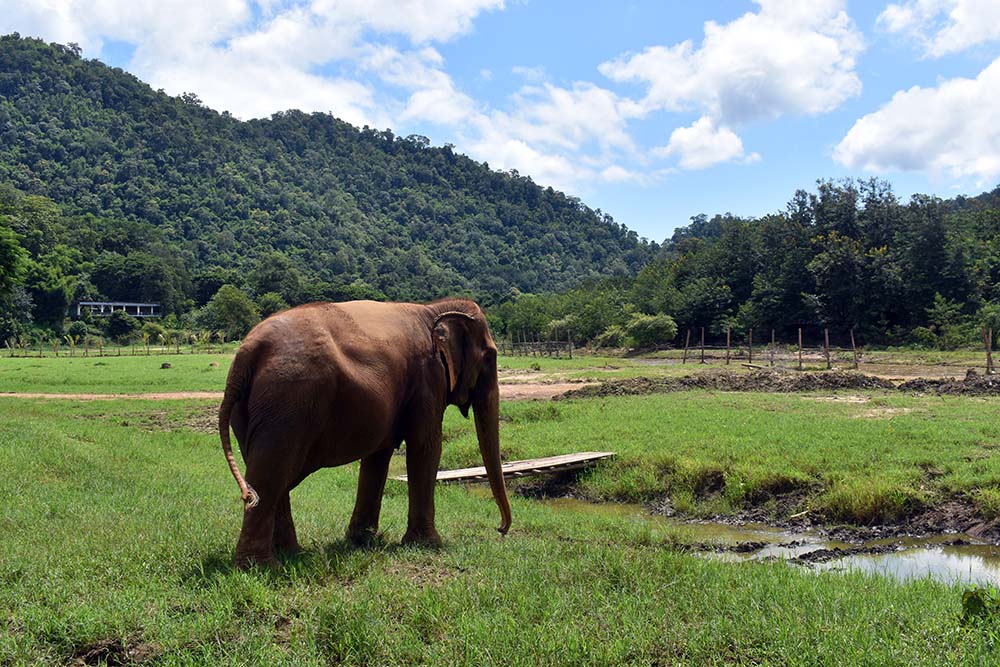 One Day at Elephant Nature Park

The day at the Elephant Nature Park starts early, directly in front of your hotel where you’re picked up to drive to the park with your group. Once there, the guide shares the necessary safety instructions – next to wearing sunscreen and mosquito repellent, they advise you what to do when an elephant runs into your direction. After all, they are used to humans from their previous jobs, and visitors are therefore allowed to enter the grounds with a guide. Only a couple of animals are kept separately, because they require more rest or can get aggressive.

The instructions are rather simpel: Stay in the group, stay quiet, and don’t get close to the elephants unless they come to you. If they do, show them your empty hands (they are most likely looking for food). If they want to play and come running at you, don’t try to be faster – you are not. Just run a little and then take a sharp turn, as elephants can’t change directions as fast as humans. Ignore the buffalos that are there alongside the elephants. And follow the instructions of your guide at all times. To be honest, I was nervous after this, especially as it took the first elephant about 30 seconds to spot our group and come to us excitedly. Quite impressive! 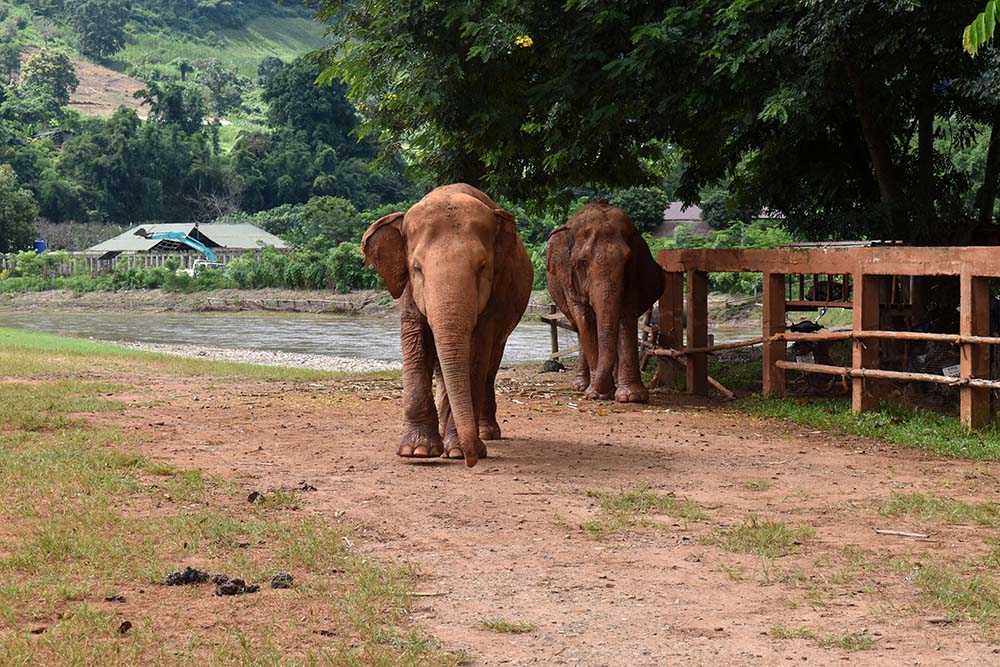 Walk in the Park

Our guide kept telling us everything about every single elephant, the park, the surroundings and the history of the country while walking calmly through the park. It was very interesting to learn about how the different elephants came into the park – and shocking at the same time. One started posing for photos as soon as we took out our cameras, due to former punishment in her tourism job if she didn’t. But she also made sure to double check that we really didn’t have any treats on us and kept bumping into our guide for cuddles.

About 10 minutes in, a delivery of food arrived, and suddenly, all interest in the humans in their territory was gone. With our guide, we were able to get super close to the eating giants, as long as we didn’t disturb them. As we were in a really small group (the only one that day!), we even got lucky and were allowed to help with the feeding of a particularly old elephant lady. As she could only munch on some prepared snacks, it took quite a while and we had to make sure not to hand to much to the younger ones that also wanted their share. Very cool experience! 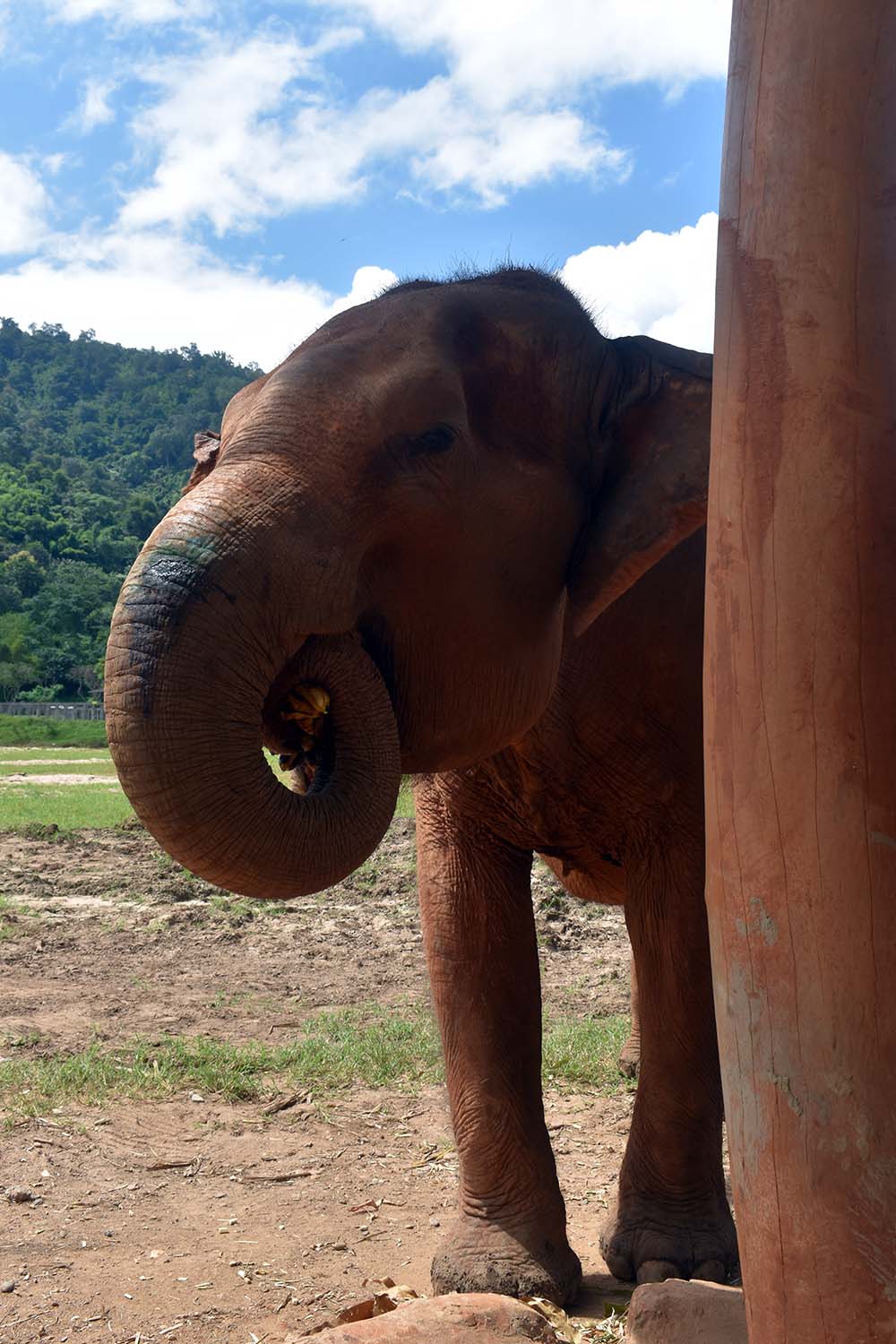 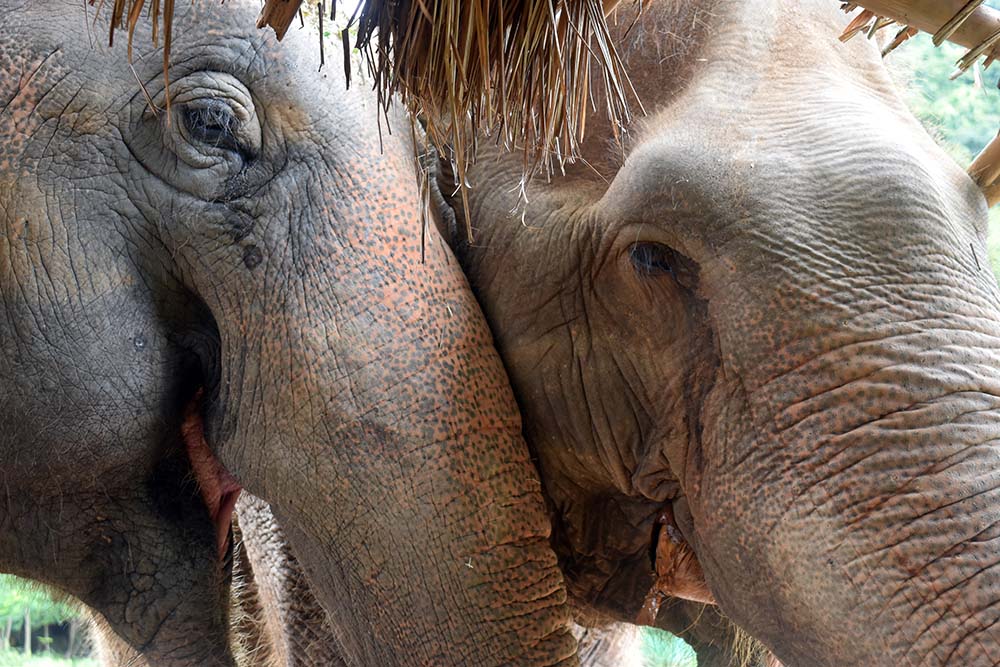 I have no idea how long the tour took – we were done around lunch time. Our guide was telling us the story of every single elephant, not only in the area we were in, but also of those in separate areas. Mostly males (and sometimes their mothers to keep them company) that are getting more aggressive when getting older. But there were also some babies, that were especially interested in playing and kept running at us. Luckily, our guide had an eye on us and made sure we got out of the way fast enough – it might seem cute, but even a baby elephant is heavy enough to severely hurt a human. Most elephants in this park were bought out of their tourism jobs, which requires a lot of donations to save as many of them as possible. What started out with one single elephant has now become a huge area with several smaller herds. 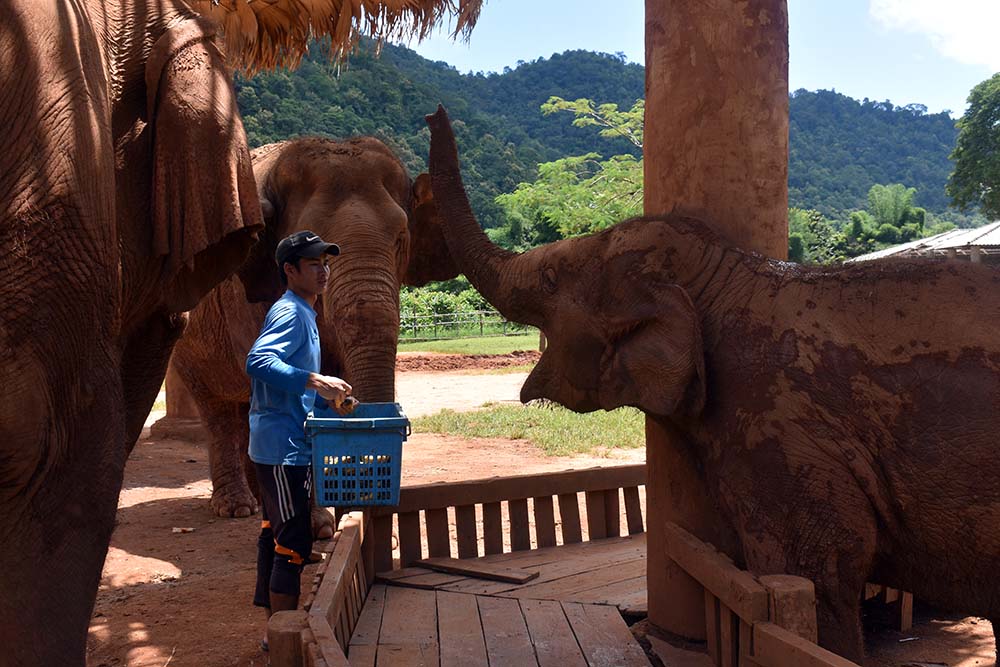 At the Elephant Nature Park, you can’t only see the saved elephants and buffalos, they also take care of cats and dogs. Before heading to the Cat Kingdom that houses about 2,000 cats, we walked past the river, where we were able to see three old elephant ladies taking a bath together. The perfect confirmation that elephants do not need any help of tourists when bathing – they are perfectly capable of doing so themselves, and they love it. 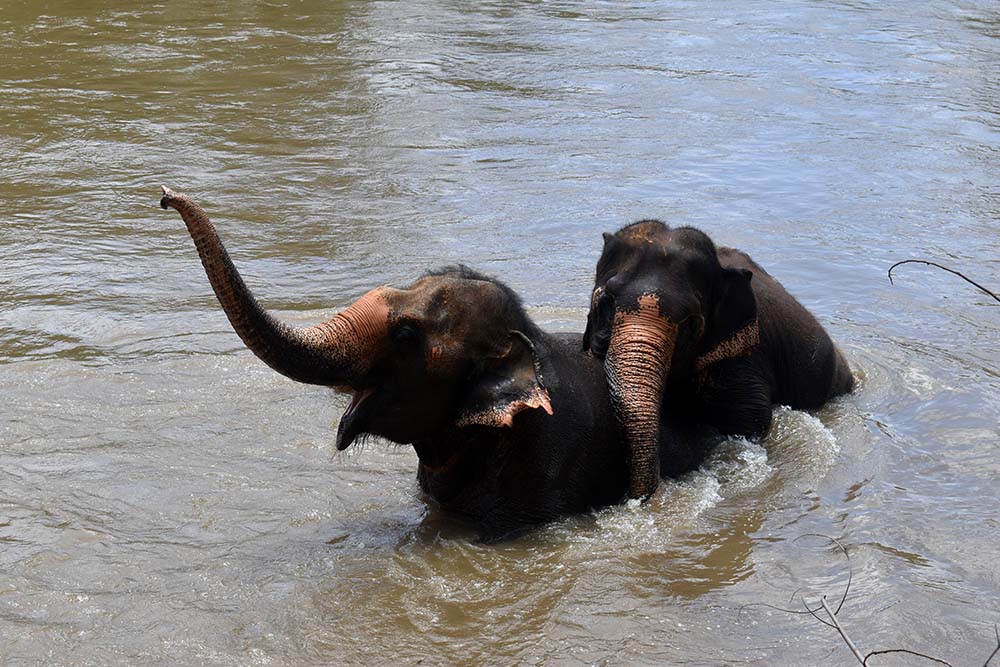 Once the three elephants got out of the water and made their way to a different part of the camp, most likely for some food, we continued our way to the Cat Kingdom. Again, we were able to enter, and here, of course, to pet the cats. 2,000 cats and one volunteer who knows every single one of them – again, very impressive. As soon as we sat down here, we were surrounded by cats, some of them even jumping on us for some cuddles. Although I’m not the biggest fan of cats, this was a very nice experience! Just as the puppies, we visited afterwards. Not sure if this is always possible. Again, I was lucky to be in a very small group and in the off-season, I can imagine that on usual days, they cannot let everybody touch the dogs and cats.

Back to Chiang Mai

In the afternoon, it was time to wave one last goodbye to the elephants before jumping on the bus again. Back to Chiang Mai! Full of memories, and with lots of beautiful photos, almost everybody fell asleep on the ride back to their hotels. I think, we all had a lot of respect for the people working hard here every single day to protect this endangered species.

As mentioned, the Elephant Nature Park is located about 60 kilometers out of Chiang Mai in the Northern Chiang Mai Province. You can order the tickets for your trip via their website, but only when you receive the confirmation by email can you pick them up at their office in the city center of Chiang Mai.You can enter the address of your hotel or hostel during the booking process for the pick up service.

On the website, the parks asked to make sure to arrive in Chiang Mai at least one day before the booked trip. They cannot pick you up at the station or the airport, and as the night train from Bangkok or Ayutthaya can be late (and mostly is), you might not be in time for your trip.

Next to the right clothing and your camera, you’ll need sunscreen and mosquito repellent for your trip. You’ll stay out in the sun for the best part of the day, so maybe also bring a hat. And make sure you have a rain jacket on you when visiting in the rainy season from April to October. 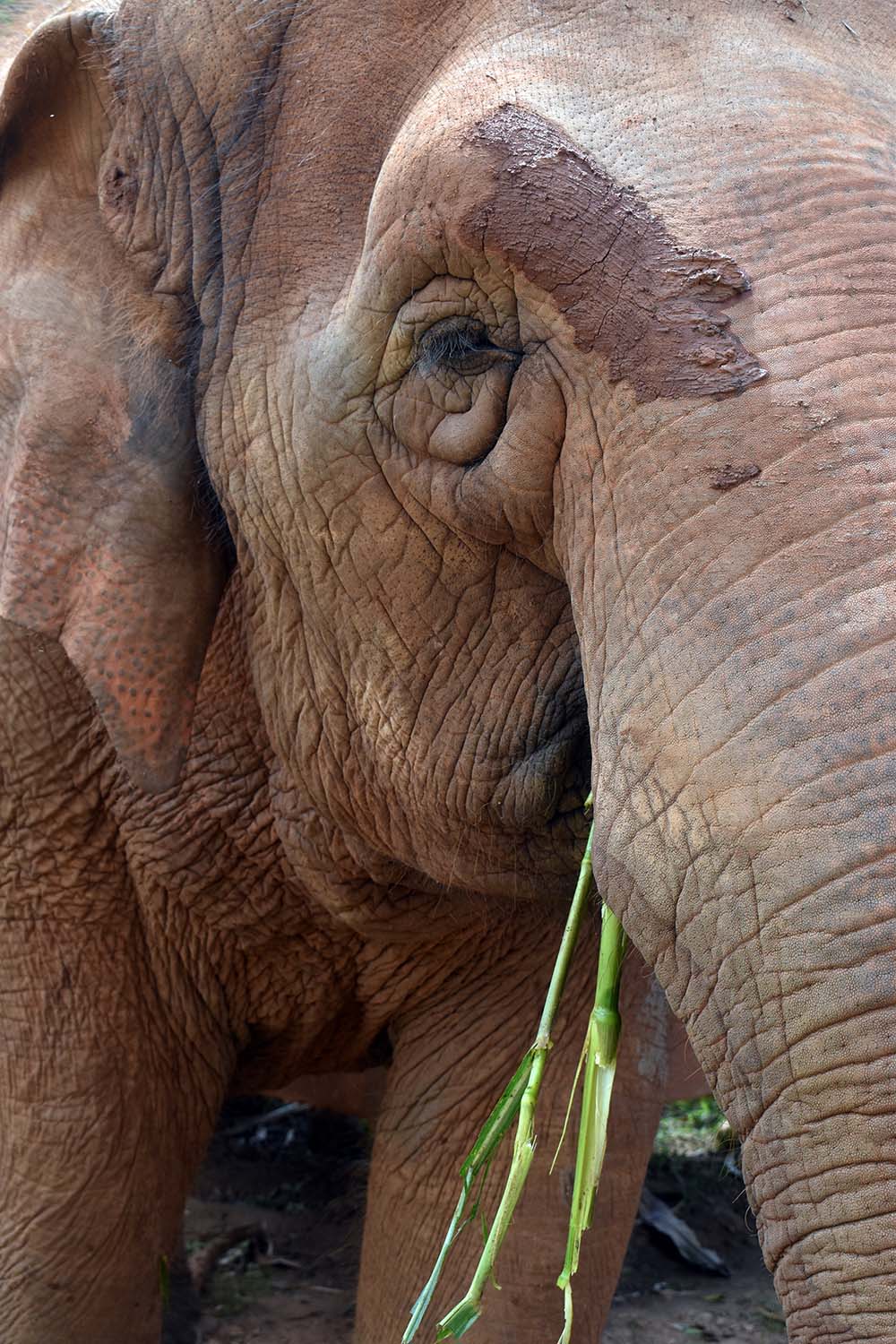 Why it’s Important to go for a Responsible Elephant Experience

You might wonder why it’s so important to go for a responsible elephant experience rather than one where you could snap some great pictures bathing elephants. Well, first of all, because of respect. Elephants are still wild elephants, and with a visit in one of the sanctuaries, you respect them more than by riding them. Seeing them act naturally is way more valuable than any picture you could possibly take while on the back of an elephant.

But there’s more to it: Thailand once had so many elephants, while now, they are only very few left. Not only because of the hunt on ivory and the destruction of their natural habitat, but also because they are tamed for tourism jobs. Especially in touristic places like the ancient city of Ayutthaya, you can hardly overlook how poorly elephants are treated to gain money from tourists. As soon as an elephant gets aggressive, hurt or too old, it’s not valuable anymore, and I don’t even want to know what happens to the poor animals then.

At responsible sanctuaries, those elephants finally get the space and quietness they need to lead a happy and free life. And while many of them still approach humans due to previous experiences, at least now, they do have a choice. Pleas make sure to go for the ethical choice during your next trip (to Thailand or anywhere else in the world), rather than a picture to impress people at home.